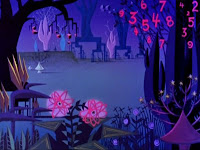 Well, I’ve been tagged in a “meme”– which, according to my tagger, is something like a blog version of those “getting to know you” e-mails that find their way to my in-box on occasion.

Unlike that damn redhead, Stacy Lukas who tagged me, I had no idea what a “meme” was, nor what volunteering that information would mean for my free time over the next day or two. But, as she promised in her own blog, it’s relatively simple: I’m supposed to list seven random things about myself for your enjoyment and/or education. With

1) I am a hopeless Anglophile, from the top of my red head to the bottom of my pale and freckled feet. My love for Great Britain is an incurable disease that takes stronger hold with my every exposure. I su 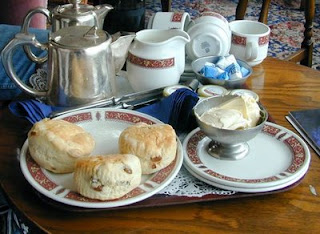 spect that it has something to do with lineage: They are my people. I am of English, Irish, and Scottish descent (from England’s Portsmouth, Ireland’s Loch Conn, and unknown parts of Scotland) It’s also been rumored that we are descendants of Lord William Canning, and we have a family crest that my cousins swear is older than QVC. I adore the British people. I love the food of England (including and especially the cheeses, clotted cream and “Extermely Ch

ocolatey Mini Bites”). And oh, how I love Guinness. I also find something sacred and powerfully comforting about the British tradition of tea. It is my religion. I love that I blend in with everyone on the beaches of Cornwall: nearly all of us day-glo white and freckled with red blotches where we missed with the sunscreen. And I love the wildlife. Ravens, magpies, seagulls; even rabbits. Once, when I was walking along the Hayle Towans (grass-covered dunes) with my friend Sarah, we happened upon a coven or two of rabbits. I squealed with delight at the spectacle of dozens of long ears disappearing down rabbit holes. As I stood there taking it all in, Sarah shook her head in dismay. “We eat them, you know,” she said, smiling wryly. I know better — I’ve seen them immortalized in art. The only thing I don’t like about England is leaving it. Look out, Bill Bryson. I could take you for the Anglophile title.

2) I am nicknamed after my great-uncle, Charlie Fern. He was a fascinating caricature of a man; a pioneering aviator (barnstormer) and journalist (a self-proclaimed “UPI man”) in Hawaii, who worked his way up to owner and publisher of the Garden Isle.

A problem with the fuel gauge on his twin-engine “Jenny” led to his becoming the first man to fly a plane round-trip in the Hawaiian islands. I’ve found few writings about him that didn’t include adjectives like “talented”, “daring”, and “legendary”. Uncle Charlie was responsible for developing my love of letters and of writing. My nom de plume and company name isn’t just a tribute to this personal hero; it is a legacy that I continually strive to honor in my own life and profession. It is also a daily reminder that you cannot live a large and honorable life without taking risks and maintaining integrity. A bittersweet asterisk: The man who knows the most about Uncle Charlie’s life is his son Charles Jr. (who goes by Mike), whom I have never met because my family lost track of him. They claim he is a recluse (and a genius). I know very little about Mike, except that he’s about 85 and he lives somewhere in Orange County. And he is the guardian of the remainder of details about the life of one of the greatest men I’ve ever known.

3) I have an irrational fear of bridges, especially tall ones. I will to bring a car to a screeching halt on the shoulder of a road that p

resents a sudden and unexpected bridge ahead. I am terrified of the Delaware Memorial Bridge (or DEL MEM BR, as the sign says), and I am physically unable to drive over the Golden Gate Bridge and the bridge that leads into Newport, Rhode Island. So, if you’re ever caught on a road trip and I’m behind the wheel, I suggest you check the map and make sure you know what’s ahead.

since I was a child, and I have been known to eat an entire can in one sitting. In my family, it was a Thanksgiving tradition to set a bowl of black olives out on the dinner table. And traditionally, they never lasted till dinner if there were any kids around. It was one of life’s early pleasures, popping an olive over the tip of each finger, wiggling them, and eating them. And many a Christmas stocking was stuffed with a can of olives for me. Mine, all mine.

5) I sang a duet with Fred Rogers (as in Mr. Rogers Neighborhood) on April 3, 2002. I was staffing an event in the East Wing — The White House Conference on Early Childhood Education. Mr. Rogers was one of the guest speakers. I should insert here that I have met, and worked for, a lot of very famous people. By that point in my tenure at the White House, I was fairly numb to the celebrity effect. So it is somewhat embarrassing to say that of all the big-name people I’v 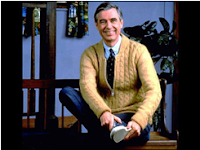 e encountered in my life, it was Fred Rogers who reduced me to a giddy kid who could hardly find her voice upon meeting him. He’s just exactly as the world saw him on television: Warm, kind, attentive, sincere.

I shook his hand after the event and told him (babbled, actually) that when I was a kid, I didn’t much care for his show, but I had grown to appreciate him (and his music) as an adult. I often called my grown-up friends and sang “It’s Such a Good Feeling” to them — in fact, a friend and I had worked out a little stage routine to the song. His face lit up and he said, “Why don’t we sing it together?” I was utterly stunned. This was an opportunity I simply could not refuse, but I risked being fired for upsetting the program to accommodate him. Yet he insisted, and hnd his “handler” (manager) agreed.

Once all the guests from the conference were seated in the dining room for lunch, Fred Rogers excused himself from the room. He walked out to the main corridor on the first floor of the White House, where the Marine Corps band was playing. Mr. Rogers and I were alone there except for the musicians and one or two staffers. He walked up to the White House Steinway piano – the o 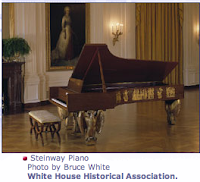 ne with golden eagles for legs – and asked the Marine who had just finished playing a song on it if he (Fred Rogers) might sit down and play a song. The Marine promptly and cheerfully obliged. Mr. Rogers signaled me over. He started to play “It’s Such a Good Feeling,” and I couldn’t believe what a magnificent pianist he was. He rolled across the keyboard with exquisite grace and started to sing. He looked at me expectantly. When I could find my voice, I squeaked along with him. By the end of the song, I had tears running down my face. Yep. It was such a good feeling. A month or two later, I received a package in the mail. It contained an autographed picture (he’d also written a bar of notes from the song on it) and his entire collection of CDs (which I play for my 3-year-old son on a regular basis). Funny how one of the pinnacles of my career had nothing to do with speechwriting.

6) I nearly lit a man on fire on April 23, 2001. It happened when I was a White House speechwriter. One morning my boss, the head speechwriter for the President, brought around a man in a nice suit. I was deeply focused on an article I was reading. They appeared at my office door and I wheeled around in time to hear my boss introduce him. I know—at least I think I know – I heard “Josh Bolten,” but as I stood up and stuck out my hand, I said “Hi John.”

I was swiftly corrected. My boss explained to Josh that I was the First Lady’s speechwriter. Josh’s expression conveyed a mental filing of information that made me uneasy. As I held his steel grip in my handshake, I realized that his sleeve was dangling perilously above the open flame of a candle I had lit on my desk. Bolton, who must’ve felt the heat, looked down and asked me what the “altar” was for. My boss, who had been standing silently in the doorway, shifted uncomfortably.

I stammered that the painters had just finished our offices and the candle was ridding the room of the paint smell. They were halfway down the hall as my voice trailed off…I picked up our office staff directory. I thumbed over to the section marked “Chief of Staff”. There it was: Third person from the top. Josh Bolten. Assistant to the President and Deputy Chief of Staff of Policy. I’d just met the fourth most powerful man in the White House, got his name wrong, and nea

rly lit his suit on fire.

7) I know The Number One place to watch Marine One take off from the White House Grounds without getting shot by the secret service. It’s from the Old Executive Office Building; specifically, on a narrow ledge just outside a window in a top-floor hallway near the library. I and two colleagues found this spot when we worked in that building. I’m fairly certain you won’t be shot, because when we were watching a departure one morning from that very spot, I noticed two pairs of binoculars pointed at me — by two secret service guys on the roof of the White House. We waved. They waved back. I lived to tell the story.

There you have it, folks. Seven things that shaped the quirky person I am. And now…my seven victims are all from Twitter:

I don’t know a couple of these poor unsuspecting characters, but they seem like fascinating people based on our Twitter conversations. Anyway, that’s the point, isn’t it — to get to know them better by their blogs?

Here are the rules:

* Link your original tagger(s), and list these rules on your blog.
* Share seven facts about yourself in the post – some random, some weird.
* Tag seven people at the end of your post by leaving their names and the links to their blogs.
* Let them know they’ve been tagged by leaving a comment on their blogs and/or Twitter.