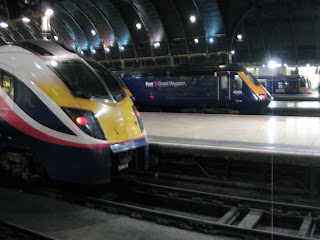 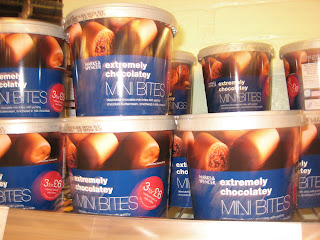 ….or, Better By Chocolate (BBC)

I have developed a theory: if you maintain a sunny disposition and fiddle around with something long enough, it’s bound to improve. Take the Cannon camera, for instance. After its losing battle with the floor yesterday, most would have put it away and given up hope on digital vacation pictures. But not me. Rather than accept my misfortune, I ignored it and carried on as usual, snapping photos and taking movies. And what do you know, the Little Cannon that Could began, very slowly at first, to capture my own sense of optimism. Call it denial, but I call it progress: By pudding time, nearly all was well, and the camera was humming along, digitally speaking.

The British are that way, you know. They have a proud history of refusing to frown in the face of adversity. They’ve shown the world the proper way of going on about their business. Even in times of war we’ve found them having their morning tea, stepping around potholes in sidewalks or bumping along the Underground while reading the Times; stopping off to top off with a pint, and heading home at night with an “All’s well that ends well” in their step.

I rather like the theory: Refuse to accept that things are as bad as they really are, and things are bound to get better.

Case in point: You’re looking at pictures taken roughly 24 hours after the Cannon crashed to the marble floor and nearly lost its lens. Yet it appears to be on the mend. No, really. I think it’s going to be allright. Neither Elliot nor I need red-eye corrective adjustments in the photo accompanying this blog. In fact, Elliot’s eyes have never been more photographically accurate.

Maybe all the Cannon camera needed was a walk in the park.

[Today we took our second walk in the park. I spent an hour following paths and enticingly-worded signs — “Peter Pan” This Way; “Princess Diana Memorial Playground” That Way; “Kensington Palace” This Way; “Princess Diana Memorial Fountain” That Way — yet I didn’t find a playground, statue or monument until we were a few feet away from the exit at dark. There it was, in the dark, a few feet from the exit – mere yards away from the gate that I’d entered twice before: A Playground. ip information . We may journey back there tomorrow in time for lunch. I will wear something other than heels.]

Back to the camera: Throughout the day I continued to take photos. I manually fiddled with the lens itself (which won’t retract), pressed buttons, slid sliders, turned options on and off, and finally found my way to optimum performance in a controlled setting: the “Macro” button. Lo and behold, in the lobby of the hotel, photographs started improving, bit by bit. I have both witnesses and evidence, which you shall see on these pages.

I wonder how many other appliances will get better if you simply refuse to accept that they’re broken, take them along with you on walks in Kensington Park, and lavish them with attention for hours on end. Wouldn’t most everybody’s disposition improve under similar conditions?

The only thing that seems to have gotten crankier is the Sit-N-Stroll. It has not taken to the cobbled streets and bumpy sidewalks of Kensington. On more than one occasion it has utterly refused to move another inch, and I’ve had to carry both it and its passenger (Elliot) until they were rested enough to carry on on their own. The stroller is now parked dejectedly by the door of our room, its wheels brown and muddy from a horse path we plowed across when I’d lost my way from the sidewalk in the gardens.

In other news, the tap water in our hotel room is heavily chlorinated — a fact that becomes increasingly obvious the longer the water runs. Not enough chlorine to bleach clothes, I hope, but I am a bit concerned about washing my hair in it. The good news is that Elliot’s sippy cup is soaking in a warm bowl of it, and it should be sterilized by morning.

That brings me back to another part of our conversation with the cab driver from yesterday, who’s growing smarter with each passing blog. He told us that England has grown by 30 million people, but the infrastructure hasn’t kept pace. In fact, more people are required to live on the same amount of water as they had 40, 50, 60 years ago. They get their water from the sky, he says. And the sky isn’t making any more of it. God forbid they have a dry summer. They’ll have to start importing it, or building desalinating plants. There’s some wisdom in London’s cabbies. Folk wisdom, maybe, but relatable nonetheless. Should have asked what the old chap’s name was.

We saw trains today. Great Western High Speeders, I call them. Elliot is very excited about riding in one on Thursday. He also wants to get on an airplane tomorrow.

After the outing at the park, I ordered just about everything on the menu in our hotel restaurant’s exterior lounge, including but not limited to: Full tea (a pot of tea with a three-level-tall tower of finger sandwiches, biscuits, puddings and cakes; and hallelujah, clotted cream and jam); a bowl of broccoli-British-cheese soup; lamb and curry and naan; a basket of bread with butter; a pint of Guinness; and water. Brian, our model of moderation, restraint and good temper, had a single-serving course of dinner.

It’s difficult to describe clotted cream. One day when it’s not 4 a.m. in London, I’ll attempt to do so.

I enjoyed every minute of dinner(s) and dessert(s), and it was around this time that the camera started feeling better, as several subsequent photos turned out quite nicely.

We finally pushed away from the table and set off for a quick tour of Paddington station (en route to another grocery store in the station). I left the lounge feeling thunderous, groggy and whimsical. My hips asked for a cigarette.

At the grocery store I purchased items for breakfast and lunch: more fresh fruit, honey yogurt, rice-strawberry something or other that I mistook for yogurt; milk, stunningly delicious, fresh orange juice, bananas, and items from the shelf that were so cleverly worded that I couldn’t bear to leave the store without them.

I snapped pictures of “extremely chocolatey” something-or-others (above), and “wobbly worm” candies.

We found a Cornish pasty shop just a few feet from the trains, and I took pictures of both the shop and the trains. I am saving my first pasty-eating experience in 5 years for Cornwall, though. Some things are worth the wait.