PBS TV stars, local celebrities and entertainers will serve up some serious fun in the Children’s Entertainment Tent this year

Great causes have a way of bringing out the best in people, don’t they? Nowhere is that more apparent than at the Texas Book Festival, where some of the nation’s most intriguing authors and popular entertainers turn out year after year to celebrate the joy of books and reading — and support Texas public libraries.

The festival runs every year around this time, and roughly 35,000 people descend on Austin to attend the two-day event, which raises money for our traditionally under-funded public libraries.

I’ve been involved with the festival in one way or another since it began, but this year I signed on for my most ambitious effort yet when I agreed to serve as Chair of the Children’s Entertainment Tent in late August. I was tasked with finding, recruiting and booking enough talent to fill a two-day schedule of children’s entertainment.

With a little luck and a lot of advice and encouragement, I whipped up a baker’s dozen of incredible acts: 13 back-to-back performances running from 10:00 AM to 5:00 PM on Saturday, October 31 and Sunday, November 1…emceed by two celebrity news anchors on Saturday and a nationally acclaimed star from musical theatre on Sunday.

On Saturday our little souffle includes a show by the wildly popular Biscuit Brothers at 1:00 PM (see below for details) and a smorgasbord of singers, songwriters and interactive performances before and after that.

I hope everyone will stop by to catch the last show on Saturday by the Peterson Brothers Blues Band. The brothers are two musicians, both under the age of 13 (one of whom plays no less than 6 instruments), and they will be joined by a couple of friends on bass and drums. I watched about 60 seconds of their performance at a local coffee house and knew they’d be a perfect way to wrap up the day. You won’t believe the sound that comes from these kids and their band — they’ll give you a good send-off, especially if you plan on catching some blues entertainment later on downtown.

On another note…There’s a fascinating twist in the lineup of this year’s festival. In cooperation with The University of Texas at Austin’s Harry Ransom Center, the Book Festival is weaving in an intriguing mix of activities to celebrate the 200th anniversary of Edgar Allen Poe’s birth.

The children’s entertainment tent will feature readings from a selection of Poe’s works — presented in child-friendly and dramatic style by Shakespearian actors from the TexARTS Academy for the performing and visual arts (and led by the astonishingly generous and gifted TexARTS Executive Director Todd Dellinger, who will also serve as emcee on Sunday).

I hope you’ll come out and catch a few of these awesome acts … which are FREE all weekend. These generous performers have donated a great deal to help raise money for our state’s public libraries (whose already-strapped budgets have taken a beating during the nation’s economic crisis). Some of the acts themselves are non-profit organizations, including TexARTS and the Biscuit Brothers, and they work hard to raise money for their own organizations.
Festival-goers can attend performances and support the performers in one simple and rewarding way: Stop by the children’s entertainment tent and pick up a few early Christmas gifts for your little friends and loved ones. Many of the performers will have CDs, DVDs and other merchandise for sale during and after their shows.
I could go on and on about the great things you’ll find at the Children’s Entertainment Tent this year….in fact, I plan to. I’ll be updating this blog throughout the week with more information about the incredible lineup this year.
Stars of Wildly Popular PBS Kids TV Show,
The Biscuit Brothers, perform at 1:00 PM Saturday 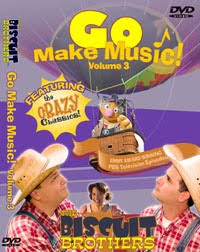 The Biscuit Brothers star in an EMMY Award-winning PBS kids’ music and education program that airs on KLRU-TV PBS Austin and on a number of other PBS stations across the United States. They also work outside of the studio, venturing off the Musical Farm to entertain live audiences with concerts that are wildly popular with children and draw
an impressive fan base of adults as well.

The Biscuit Brothers program was created by Damon Brown, Allen Robertson, and Jerome Schoolar, whose backgrounds in professional theatre, music and acting led to this successful collaboration. All three write and perform on the show, which is hailed for its originality and distinctly Austin style.

You won’t find much fluff or filler in these Texas Biscuits. With the help of a talented crew and professionals such as Jill Leberknight, who plays “Buttermilk” on camera, the team presents an entire landscape of lessons in the arts. They introduce new ideas to children with original songs, good humor and brilliantly crafted scripts (which cleverly conceal the fact that the show is educational).

The cast and crew are fearless when it comes to presenting complex material. They tackle everything from music theory to geography and tuba repair with aplomb, and they weave it all together into well-delivered, entertaining and memorable programs.

The program’s official mission is to introduce arts-related content to children with ideas that engage creativity and learning. A happy side effect of that work has been the delivery of a splendid repertoire of music that’s distinctly Austin, delightfully entertaining and undeniably worthy of a permanent place in your homes and hearts. The program captures all that’s best about children’s music and entertainment while teaching valuable lessons about life and the many ways we can bring harmony to it.

The Biscuit Brothers have a way with words and music — and a habit of leaving audiences with the distinct impression that our world is infinitely better when we can Go Make Music together.

PS – be sure to check out the Biscuit Brothers’ CDs and DVDs at the show. As the mother of a 4-year-old boy, I can say with some authority that their recordings will quickly become some of YOUR favorite items in your children’s media library. Here’s one of my favorites – a pure-genius musical interpretation of something South of the Border performed by Biscuits puppet character “Tiny Scarecrow.” Cracks me up every time I watch it: Chickens playing bongos. (CAUTION: Addictive melody.)