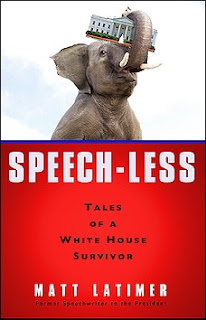 “Lord love a duck,” as one of my favorite professors used to say.

“Major League Asshole,” as one of my former bosses might say.

Both would be right in this case, I’d say.

A soon-to-be-famous ex-Bush Administration staffer (now labeled an untrustworthy and unemployable ex-speechwriter, I suspect) has toddled out across the South Lawn of the White House to hang some dirty jockeys, which apparently grew quite bunched during his short stint putting words in the mouth of a past president.

I chuckle and shake my head every time I hear about another former “Bush Insider” parading around America talking all expert-like about “extensive” experience and lessons learned while serving in the office a U.S. president.

I wrote speeches for Laura Bush in Texas from 1995 through 2000, and I was her White House speechwriter in 2001-2002. Matt Larimer hadn’t made his big entrance onto the national stage by then, apparently, because his name doesn’t ring a bell. Then again, I don’t pay much attention to bells that signal feeding-frenzy time for tasteless, self-righteous piranhas. The bell tolls for them and them alone.

Like any other office in America, the White House has always been (and will always be) staffed by an interesting mix of people who range from one extreme to the other — from bright to dim; loyal to opportunistic. From decent and hard-working to lazy spawns of Satan. The higher up the career ladder you go, the more pronounced the extremes. The world is full of bad people, frankly, and that’s one of the lessons that most of us learn by the time we reach our 30s.

The people whom I’ve always thought of as heroes and leaders don’t run and tattle on the people they perceive as bad guys. They’re above all that. The best among us know how to be kind, forthright, self-conscious and willing to admit their own shortcomings. They make mistakes like the rest of us, sure, but they don’t blame others for it. And mistakes don’t dissuade them from working hard to make the world a better place in spite of the bad people working around and against them.

Wise people and worthy leaders are usually generous with their portions of edification and generally look for ways to celebrate the good in life. They rise above the petty fray and let the bad guys sink their own damn boats. And down there, among the shipwrecked souls, you won’t find any legacies and important chapters of history waiting to be written. You’ll find gossips, snipes and troglodytes who have nothing better to do than stir the sand and muddy the waters of their own miserable abyss.

Telling tales out of the nation’s Number One Speechwriters School might make Latimer feel better about the bitter pills he felt he was forced to swallow, but in doing so, he’s also proved himself something of a bitter pill.

The book, a semi-educated “insider” tell-all, betrays a man who is looking for a job with a new administration or a new political party — a man who is apparently willing to sell his soul, and sell out his friends, for a few bucks and a few minutes of fame along the way.

His book may have a short shelf-life, but his pettiness and self-aggrandizement are set in words of stone, immortal. He’s cast a pall across the office of the president and all who work there; he’s also done a good bit to undermine the nation’s trust of any political leader and further disillusion an already politically weary voting citizenry. Beyond that, he’s hurt a lot of good people who were there in the trenches, too.

Tsk. Such a tragic story. And precisely why little boys should not play with matches, especially when they’re standing on a bridge.