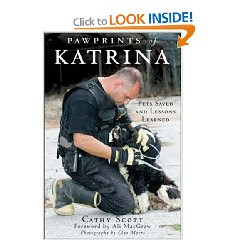 My longtime friend Cathy Scott, who is a journalist, college professor, and acclaimed author (check out her latest book, Pawprints of Katrina, on Amazon.com) wrote a good blog today — a not-so-distant look back at competitive news coverage.

Cathy and I worked together at the Vista Press, a newspaper in North San Diego County (California) during the good old days when I was fresh out of college and full of piss and vinegar about print news reporting.
In her blog, she wrote about a conversation we had on Twitter about the competitive spirit of our newsroom.  “The 50-year-old Vista Press (a now-closed daily paper owned by Andrews McMeel Universal) was in direct competition with the San Diego Union‘s North County edition.  The Union was huge by comparison. Still….we scooped the SD Union on a regular basis,” Cathy wrote.
Indeed, we proved that a small paper could run circles around a major metro because we had a great, competitive staff and a lot of competition in the market…and that drives excellence.
We had a small staff at the Vista Press, and as managing editor I had an enormous amount of responsibility (at the tender age of 22).  I made some mistakes, sure, but damn if I didn’t have fun making them.
I was less concerned about the business bottom line and more concerned about the news, and I often upset the sacred balance between circulation, the ad department and the newsroom.  I was 100-percent news — that’s what they hired me to do.  I fought for my reporters, for their stories, and for the benefit of our readers.  I wasn’t afraid to hold the presses for a good scoop or a great crime beat story that broke at deadline, and the circulation department and my publisher didn’t like me for doing it. We may have lost some money, but we gained a heck of a lot of experience, and we all went on to bigger and better things, as Cathy said in her blog.
Cathy was a terrific colleague.  I worked late into the night most nights, writing, editing, supervising the paste-up room and putting the paper to bed.  Many of those nights Cathy was there with me, pounding away at the keyboard and listening to the police scanner.  It would come as no surprise to me if I had learned that she had a scanner on her bedside table instead of a clock radio.  She truly cared about her work, often insisting that she could chase a good scanner call down at 10 p.m. and turn it into a last-minute addition to the next day’s paper.  She had a sense of urgency about the news, about covering the crime beat better than our competitors, about learning more and doing more.  Bottom line — she hustled.  Reporters like Cathy were hard to find then, and harder to find today.  I was lucky.  I had more than one of them on staff.
Aside from Cathy, we had bright young stars like Leslie Hueholt — an impeccable writer who started as an intern at the paper and went on to become a full-time reporter.  I was always grateful for her copy, because it was so fun to read and so easy to edit.
Russell Klika was a rockstar photographer and we couldn’t wait to see what he brought out of the darkroom every day.  We also had a salty-dog sports editor who peppered his office with profanities on deadline and gave us hours of free entertainment with his hilarious running commentary when he was fresh back from a high school football game or some other dubious adventure in the bowling alley next door, perhaps.
Those were the days, fer shure.
As Cathy said, “North San Diego County was a fertile training ground for us.  We worked our tails off, learned to crunch on deadline and also felt the sense of accomplishment with the occasional scoop over our seemingly giant neighbor, the SD Union.  It was David and Goliath, and occasionally David won.”
It makes me sad to think that in the end David died, because so did the spirit of competition, for the most part — there, and in a host of other similar markets that lost competing papers. Because when Goliath runs the town, too few print reporters are inspired to get off their butts and beat the pants off of another reporter.
If you want to read more about my conversation with Cathy, check out her blog and the comments at the bottom.
Share