Memories from the Kitchen and Other Natural Disasters:

December 3, 2009 / Charlie Fern
When Food and Friends Collide
Charlie’s note: This is the latest installment in an informal and randomly solicited series of guest essays on food and drink (and the sights, sounds, smells and miscellaneous deliverables du jour). Here, the incomparable Nichole Brown talks about her own tastes and truths as they apply to both food and friendship.
by Nichole Brown
When I was growing up everyone I knew basically cooked and ate the same. No matter whose kitchen you were served from, the meal was likely fried, smothered and covered with creamy or buttery goodness. Fried pork chops smothered in gravy. Baked chicken and potatoes in creamy mushroom sauce. Fried okra, fried fish, french fries. Cubed steak in brown gravy with a side of creamed corn. Collard greens cooked with fatback slices and bacon grease. Buttermilk biscuits with butter and molasses. I could go on. 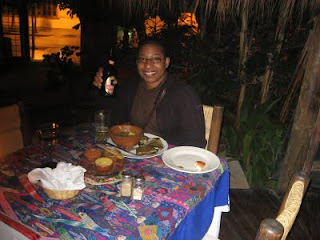 I’ll admit that I enjoyed every calorie and carbohydrate over the years. But when I developed a severe case of acid reflux in my thirties those rich, flavorful meals became my enemy. It’s impossible to adequately describe the burning sensation that slowly climbed my esophageal wall after eating certain foods. Instead of taking “the purple pill” as the doctor prescribed, I sought the advice of a nutritionist who introduced me to an entirely new world of eating.
After weeks of food journaling and experimenting to find out which foods triggered the reflux, I had to give up the Quaker Oats oatmeal packs I had for breakfast most mornings, the Stouffers and Marie Callender’s frozen lunches, white rice, white bread, flour pasta, heavy sauces and creams. I now cook my own steel cut oats, make up quinoa recipes and gluten-free pasta dishes. The only food I fry these days is okra. I snack on seaweed sheets and rice chips; I even drink aloe juice.
Not everything I eat is super-healthy, but my food choices are worlds apart from what I used to eat. I’ve grown so accustomed to making healthier choices that I walk past the cookie and chip aisles without hesitation. Still, most people I know cook and eat the same way – except now we’re all healthy food nuts. We’re the Whole Foods, Trader Joe’s, local farmer’s market and health food store type, more prone to buy fresh fruit and veggies and organic and rBGH-free meats and dairy than processed. It’s pretty much the norm these days.

At least that’s what I thought until my oldest friend visited me recently. What should have been simple tasks of making breakfast and lunch ended up being anything but. I went through my cupboards and fridge calling out food options, but she wanted none of what I had to offer. She nixed the steel cut oatmeal with raisins and walnuts. Gave an eye-roll to rice chips with seaweed. No to turkey burgers. No to roasted corn nuts. Wouldn’t even try the C-Boost fruit smoothie and Mango Lemonade. Aloe juice was out of the question, no matter how much I tried to convince her of its benefits to the digestive system.

I take some pride at the one meal she let me cook for her: scrambled (organic) eggs with cheese and turkey bacon for breakfast. Lunch was a different story.
For lunch, she asked for McDonalds, a hamburger Happy Meal, no less. And to make matters even worse, she went out to buy her own supply of potato chips, chocolate chip cookies and orange soda.
I honestly felt terrible that she didn’t like my food and tried to make amends by having dinner in Manhattan. I asked what kind of food she wanted to try, thinking of any number of options from Afghani, Brazilian, Ethiopian Italian to Jamaican, Mexican, Thai, Yemeni. She said Applebees.

It was my turn to nix her suggestion. In a city with restaurants for every imaginable palate or dietary restriction – she wanted Applebees.

I’ve always believed that food brings people together. And eating

is one of the most popular social activities. Oftentimes the kitchen is where a crowd gathers at a good house party. But this time, in my house, food created some kind of divide between me and my friend of 33 years. It’s the kind of rift that meant we couldn’t even deal with breakfast before she left to go home. I think we both knew it meant something different to the other. To her, it meant IHOP with pancakes and bacon. To me, Le Pain Quotidien with spinach quiche and fruit.
I learned several things that weekend: that she thinks I “eat weird stuff,” and I think she eats like an 11-year old; that she and I should never plan activities around food; that in my quest to rid myself of acid reflux, I had developed a discriminating palate; and that I had, in fact, become a full-fledged food snob, for which I offer no apologies.
Nichole Brown is the Associate Editor for Corporate Communications at Ogilvy & Mather, one of the largest marketing and communications companies in the world. Outside of work, Nichole dabbles in photography, studies French and samples the many culinary delights of .
Share