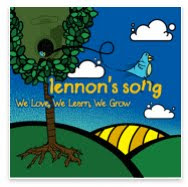 One of the benefits of living in the live music capital of the world (Austin, Texas), is that you don’t always have to go looking for good music; sometimes good music finds its way to you.
That’s what happened in the case of this disc: it found its way into my son’s music library by way of his former Montessori school teacher whose husband happens to be Erick Bohorquez — the man responsible for (literally every aspect of) “Lennon’s Song: We Love, We Learn, We Grow.”
I love this disc. Period. Bonus that my 5-year-old gives it the thumbs up, too. In fact, it’s on permanent rotation for daytime tunes in his room, and it leads the nighttime request list for bedtime tunes, which is a big deal in our family.
The songs on “We Love, We Learn, We Grow” reflect a breadth of soul and talent that can only come from training and experience — as in life experience. As in traveling the world, playing a lot of music and being a father. According to his biography:
“In 2001, he studied flamenco guitar in Spain. In 2002, he graduated from the University of Texas at Austin. Deciding to try his luck in the music industry, he packed his bags and moved to LA, where he got his start at Elektra Records. In 2004 he left California for Austin, where he eventually landed the role as Regional Manager of Marketing and Promotions at Island/Def Jam Records. While there, he was the go-to person in charge of managing Universal Music Group artists while developing and maintaining relationships at Radio, Press, and Retail. Contributing to numerous #1 hits and receiving many accolades including 2005 Major Record Label of the Year. In 2006, Erick parted from Def Jam; then quickly shifted his focus to writing, recording, and playing live.”
Children have a way of inspiring good musicians to produce great music….and how great is it that a bevy of talented musicians have grown up, had babies, and filled a whole new genre with sounds that come from the very heart of parenthood. Add this disc to the collection of real and lovely music that’s all-age appropriate.
The songs will surprise you, and they’ll probably grab hold of you, too, but in that nice way that says, “I want to inspire and entertain you, and I promise not to drive you crazy with pedestrian lyrics and over-simplified sounds.” This disc will be a crowd pleaser, and it doesn’t matter what the age of the crowd is. (Available on CD Baby and iTunes if you want to toddle on over and give it a listen.) 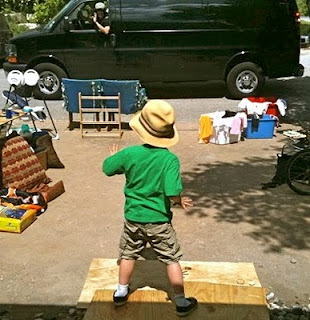 Erick swings by to say hello and drop off his disc for Mr. E.
Share