Mr. Johnny and Sharon are five-year favorites of the Texas Book Festival Children’s Entertainment Tent. This year they bring scarves, bugs, drum sticks, streamers, bubbles and more to the Festival’s opening act, which will inspire children to dance, jump and sing along in the “most interactive music show” in Central Texas. The duo has performed together for more than 10 years at venues such as ACL, Austin Museum of Art, Nutty Brown, Wild Basin, Zilker Hillside and regional schools and libraries. They also publish KidEvents Weekly, a digest of the best kids’ activities in Austin. See www.mrjohnny.com for more details. 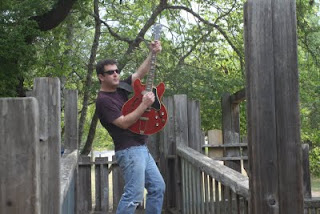 Austin musician Walter Tragert
Walter Tragert’s musical training began in the cradle and involved his rocking to the rhythm of “Gloria” as interpreted by his adolescent brothers’ garage band. Since his portentious start, Walter has crafted his own career as an acclaimed songwriter and performer. He’s been hailed as Texas’ answer to Graham Parker, Bruce Springsteen and Elvis Costello, but he’s undeniably unique, with a bona-fide brand all his own.

A veteran of Austin’s live music scene, Tragert has recorded and performed with a variety of artists, from Ian McLagan (The Faces, Rolling Stones) to The Tosca String Quartet (David Bryne). In 1988, he joined Grammy nominees Michele Valeri and Ingrid Crepeau as a cast member of their child-oriented show Dinosaur Rock, touring from coast to coast to the delight of thousands of elementary-schoolers.

When it comes to his combined talent and take on music, Tragert is in a class all by himself — except for those times when he’s in a class full of children. Walter is fully in his element as a teacher at the Armstrong Community Music School, which is run by the Austin Lyric Opera. He has 20 years of experience teaching guitar and songwriting, but he says the greatest experience is working with children — engaging their curiosity and energy and providing an outlet for both through music.

Music journalists have praised Tragert as one of the best of his genre. He has a “soul-man’s delivery with a poet’s heart,” according to Texas Music Magazine.
Tragert recently released his first full-length children’s music album, “Rough day in the Sandbox.” The artist got together with a few well-known friends to record and produce the album, which was released this month (October 2009). The result is a splendidly creative collection of songs that appeal to a wide range of audiences and age groups. Walter Tragert lives, works and occasionally uses his kitchen to cook gourmet meals in Austin, Texas. He has one cat but considers himself a “dog” person.

Walter T. and the Rated G’s (a lineup you won’t want to miss) will present “A Rough Day at the Sandbox” at the Texas Book Festival on October 31.