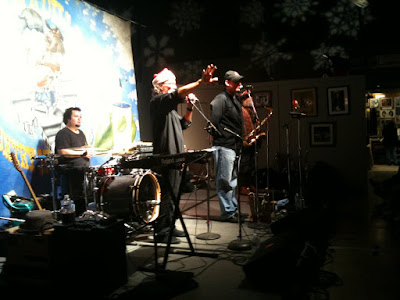 When Brave Combo’s Arjuna Contreras handed me a copy of the band’s latest release last week, I knew I was in for an experience. I also knew that I wouldn’t be able to write an objective review about their Christmas Present — a straight-up collection of holiday music with the classic Combo twist.

Talking about Brave Combo gets me all misty eyed and sentimental about my college days because many of my college nights were danced away at their shows in Dallas and around Texas.

Brave Combo hails from my college town of Denton, Texas, and around the turn of the 1990s, my college buddies and I were a part of their underground nuclear polka movement. Which beats the heck out of saying we were polka band groupies.

To their credit, Brave Combo loves all of their audiences equally, as they have for the past 30 years. Keyboardist, guitarist, accordionist, and singer Carl Finch founded the band in 1979, and 31 records and 2 Grammy awards later they’re still making music that transcends audience genres and generations.

In three decades, Brave Combo has done more things to a polka than a husband might his wife of 30 years (but in a kind, connubial way) — and that’s just for fun on the weekends. But one cannot limit the description of the band’s music to such narrow confines.

True, some of their songs sound like what might’ve happened if the Ramones had ever collided with a polka, but Brave Combo’s work stretches far beyond the boundaries of traditional classification. They’re more of a recipe: start with your choice of salsa, meringue, rock, cumbia, conjunto, polka, zydeco, classical, cha cha, or the blues. Add a whole lot of tempo, one appreciative audience, shake well, and voila: Brave Combo.

Like any nutritious diet rich in fruits and vegetables (Finch is a vegetarian), Brave Combo is best absorbed fresh and unprocessed. Their CDs are well-produced and fun to listen to, but they simply do not do the band justice. No, in my opinion Brave Combo should be devoured live, because that’s when they’re at their absolutely action-packed and unforgettable best. Course everyone who’s seen them live winds up buying their CDs so they can remember the experience (it’s like going to a circus and having a recording of it to take home with you).

If you can’t get to see them because you aren’t in Texas or don’t happen to be on their national parade route, hold tight. Every now and then Brave Combo will come to your house thanks to the wonders of modern technology, which they harness for live-streaming performances.

In the mean time you can familiarize yourself with their music by purchasing any one of CDs in their expansive collection — all worthy of your attention.

I recommend you start with their latest release,

Christmas Present….a compilation of holiday classics with a raucous twist, including a burlesque Bump and Grind version of Winter Wonderland; a samba-style O Christmas Tree; a We Three Kings cha-cha-cha; and the Must Be Santa song that Bob Dylan’s been busy making famous himself with a remake this year.

The first time I listened to the

Christmas Present CD I thought, “Now here’s what Saturday Night Live needs for music this month.” I’ve been singing along with it ever since.
Share